What The Milo Yiannopoulos VS Anita Sarkeesian Scenario Reminds Me of 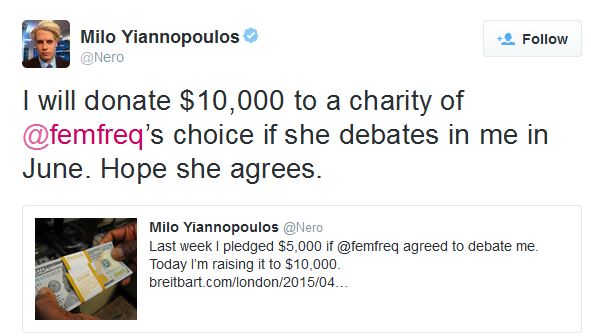 As a gamer it is kind of hard to ignore all the stories that has popped up in recent times about the video game industry. Specifically, people claiming corruption in the gaming media and as well people claiming that the content in various games specifically promote negative behaviors in the world. This issue is more commonly identified under a hashtag called “Gamergate.”

With E3 coming up there was an interesting challenge recently from a journalist named Milo Yiannopoulos. He challenged to debate a gaming critic named Anita Sarkeesian where in exchange he would donate $10,000 to a charity of her choice. She is controversial as her work in critiquing video games with a video series such as “Tropes Versus Women In Video games” has been analyzed by many as factually inaccurate to portray a sense of extreme misogyny in the video games industry. As well, a lot of people feel that she dodges criticism and serious debates about her work.

Despite all this, she has garnered a lot of praise and recognition from influential media sources and has generated a lot of money in doing so. This of course makes a lot of gamers upset. A lot of people believe that if she actually tried to debate someone without the use of pre-planned scripts the world would then open its eyes as to the credibility of her work. Even with this $10,000 challenge, apparently she isn’t taking it.

What I found kind of fascinating about this whole situation is that it reminded me of a video I first saw uploaded on Youtube called “Secrets of the Psychics Documentary” by a man named James Randi. He is essentially a magician who proves that many people who claim to have super natural powers are simply using trickery that many illusionists use.

In this video, there is a part about a person named Uri Geller who essentially convinces the world he has super natural powers such as the ability to melt metal. You can even see from the video that he was on so many magazines, media outlets and by the looks of it even gained support from the scientific community. There were then all these facts exposed about his tricks by people like James Randi. He even wrote a book about him. Despite all this, even Randi admits that it had very little effect on Geller’s career as his stardom simply faded with time. It kind of makes me wonder if this Yiannopoulos versus Sarkeesian scenario wouldn’t end up as the same.

Eventually, James Randi created a challenge called the $1,000,000 paranormal challenge. Basically, people would have to prove that they have super natural powers under a controlled environment. Till this date the prize has never been successfully claimed. That’s another point on what this $10,000 challenge from Milo to Anita reminded me of in many ways.

James Randi challenged a psychic named Sylvia Browne with this where she ultimately did not take the test and it seemed like so many people were making excuses for her to not do it. From what I have read, Sylvia Browne was extremely controversial at one point as she told a family that their son was indefinitely dead on a talk show. However, this turned out to be false. As a result, her supporters kept making excuses for her psychic readings while emphasizing how much support she has from people such as FBI agents. At the same time, there appeared to be emphasis on how her critics have bad characters where people shouldn’t take them seriously:

In a sort of crazy way, I see so many similarities in these scenarios where it’s like a battle of facts versus public perception. With James Randi it’s like he has so many facts and open challenges to the people that he is trying to shine a light on. But if you think about it, like many say perception is reality. Just from personal observations, and people are open to show me otherwise, I have seen way more proof to show that Anita Sarkeesian’s research on videos games are extremely poor. That’s why I would be interested in seeing a debate of this matter.

If this doesn’t happen then at least I get to enjoy E3 for all the gaming news and announcements that will happen. It would be nice to see this kind of debate happen though as it is welcoming to see people being educated about how gaming has evolved to be more than just something nerds and geeks play in the basement. At the same time, how in-depth the story and art of a game can be which requires you to actually fully play the game to understand it in context as opposed to judging it based on selective imagery. So interesting to see all the events that are happening as the gaming industry continues to grow.