Watching Pixels The Movie As A Gamer

So yesterday I decided to watch the movie Pixels and I was prepared for the worst as it seems to have gotten pretty bad reviews overall. At the same time, it seems to have generated a lot of negativity amongst the gaming community. There was even a funny example on how Nintendo tweeted about the launch of the movie only to have a lot of fans scold them for it. 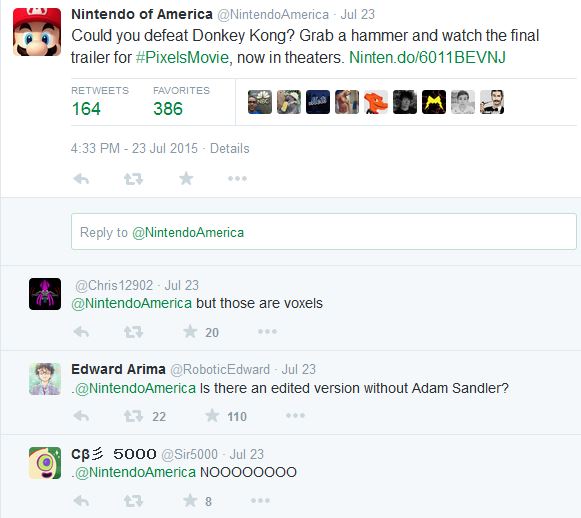 As a gamer and a person who is involved in the film and TV industry I am always interested to see how the two mediums try and integrate with each other. I remember watching Super Mario the movie as an example and boy was that horrible. I just kept thinking “How is this like the video game?” Do I even need to mention Street Fighter as well?

I went to watch the movie with some family members too which included some kids such as my nephew so I thought that would be interesting to compare a younger gamer’s reaction to the movie. Plot wise, the movie wasn’t very creative or inspiring. You could pretty much predict every cliché moment that was about to happen for the most part. My brother was even telling me beforehand that he wasn’t expecting say an academy award winning movie as opposed to something that is hopefully entertaining.

Was it entertaining? For myself it wasn’t exactly something I would highly recommend. If anything, it’s almost like a mediocre video game that exploits movie licenses to gain sales. In this case, it’s like Hollywood is doing a role reversal due to the growth of the video game business. I personally don’t think this movie was as bad as say Street Fighter though.

As with all video game movies, a person like myself is usually picky about wanting details to be as true to the game as possible. I feel that is one of the reasons why a video game movie like Mortal Kombat felt more entertaining. My nephew mainly reacted when he saw familiar game characters and the cheesy bits with all the physical humour as you would expect.

Some people online are saying the movie is a rip-off of a Youtube video called old school versus new school video by RocketJump:

All in all, I don’t think this is one of those movies that are painfully bad per se but rather it is simply trying to capitalize on gaming fans. With that in mind, I think it falls short of living up to expectations which just leaves me personally with the mindset that this was a movie crated by executives to try and cash in on a craze as opposed to creating something that fans would really enjoy.