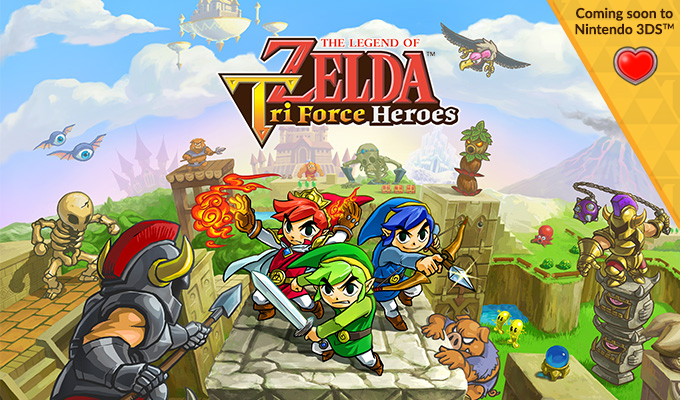 Today I tried out Zelda Tri Force Heroes for the 3DS as I noticed in my mailbox I got some demo codes for it. I heard about the game back in E3 but wasn’t too hyped about it as it sounded like Four Swords. When it comes to Zelda games I have only been interested in the main series mostly personally.

As I launched the game it seemed like there was no single player campaign and that you either had to connect locally with other players within your area or online. The online service is only available during certain times currently and fortunately it was a convenient time for me. Here are the current schedules:

It definitely feels like Four Swords with graphics that reminded me of A Link Between Worlds(Which was an awesome game I thought). As usual with most Nintendo online based games the ability for voice chat communications with your partners is non-existent. Your only form of communication are expressions/emoticons that you can tap on.

This can get a little frustrating at times. For example, in the dungeons there are three characters and often each character gets to choose a special secondary item. In the demo there was a bow that allows you to shoot arrows, a bomb to blow things up and something that looked like a gust jar that allows you move objects and players with a gust of wind. There was one puzzle where an orb switch was on the other side which of course required a bomb. However, the player cannot simply pick up the bomb and throw it as it simply can’t reach.

The player with the bomb would then be tapping the “No idea” emoticon. However, I instantly knew that to solve this puzzle that player had to place a bomb on the ground and since I had the gust jar I could then use it to blast it all the way to the orb. To the only way to try and communicate this was to stand on the edge and tap on the “Item” emoticon as I then used the wind jar so that hopefully the other player got the hint.

It completely went over his head though as he continued to simply try and throw the bombs himself. What happened afterwards is that we died which meant we had to start the level again. Each player was able to choose a new secondary item now and so I chose the bombs instead. Because of this, I placed the bomb on the edge and spammed the “Item” emoticon. Now other player got the hint and used the gust jar which made the bomb hit the switch. Kind of an example where not having an actual voice or text chat creates like an artificial difficulty to the game.

Overall it was surprisingly very fun though. Ironically, at times not having the voice chat makes accomplishing the goals more rewarding. The boss fights are really entertaining. Especially the one in the fire dungeon where all the players have to pick each other up to form a totem pole as that is the only way to hit the boss’ weak point.

It was kind of sad to just logoff after we conquered all three dungeons. There is no real way to say goodbye or stay in touch with players. I know this is done for reasons such as ensuring it will be a safe environment for children. If you haven’t tried this yet I highly recommend giving it a try. I do have some free codes to giveaway too if anyone needs it. Just reply here or tweet me @AlanYu and I’ll send you one.