Look what arrived in my mail today. Yes, it’s a pair of tickets to the Pokémon Symphonic Evolutions Concert! It’s still ways off until the tour will be heading here in Vancouver on July 22, 2015, but I am excited to see how it is like.

Funny enough, I never actually been to a live video game music concert. They recently had one that revolved around Zelda themed music here that I wasn’t able to attend. Based on videos I have seen, the audience is probably not going to be like a typical symphony audience as there always seems to be a lot of cheering as if it is a sports event. Kind of shows you that people can be really passionate about video game related items huh?

Does this make me an extreme geek since Pokemon is generally associated as a kid’s game to the mass? Doesn’t really matter as I am interested in the experience and quality of work. I do find it interesting when people find it odd that there would be such a thing for video game music. It’s almost like there are so many people who don’t realize the quality and production value of music in games can be a big deal for the overall entertainment experience. 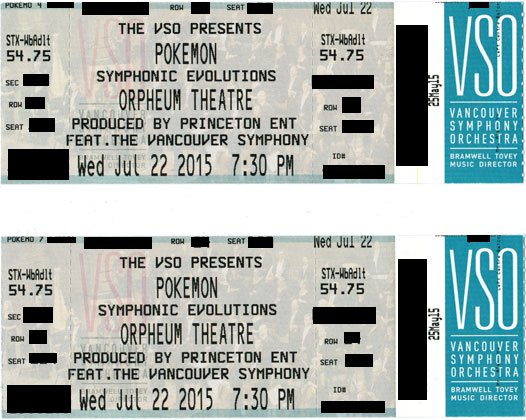 I was planning to hopefully get some footage from the show for everyone who can’t make the event. I was even thinking of trying this new live streaming app called Periscope by Twitter but it doesn’t seem to be compatible for many devices yet. Maybe I’ll just show some real-time updates to people who follow me on Twitter and possibly uploading some clips on Youtube. Wondering if I should bring my 3DS for Streetpassing too as the 10 person limit may be a bit distracting.