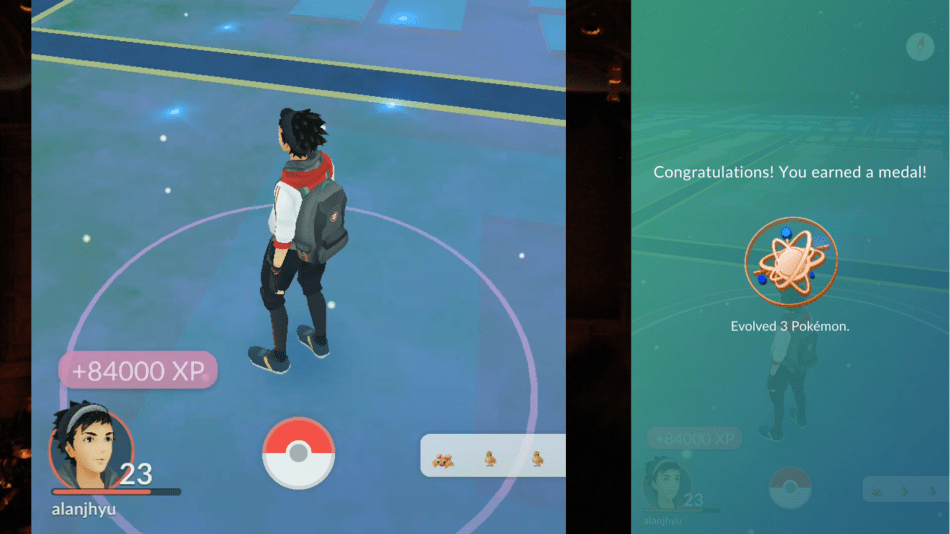 I often heard in Pokemon Go that the best way to gain massive amounts of experience is to evolve your Pokemon while using a lucky egg. This would effectively give you about 1000 experience per evolution. As well, many people have said that it takes about 30 seconds to evolve a Pokémon which means technically you should be able to evolve about 60 Pokémon for 60,000 exp.

I decided to test this out. However, my situation is a little different. I was level 23 and actually never evolved one Pokémon since I started as you can see. I just didn’t see the point as the Pokémon often seem extremely weak at low levels and I didn’t want to waste my stardust. But I felt now would be a good time as it seems like I need to participate in more gym battles to progress efficiently. Not to mention that the experience it takes to level is extremely high. As well, I had a ton of Pokémon to evolve that would actually be brand new to my Pokedex. Therefore, I should gain even more experience. On a side note, another motivation for trying to evolve as many new Pokémon as possible is I personally found that the first new registered Pokémon that I catch often seem to be very weak. I’m not sure of that is just a coincident. So, I thought this would increase the odds of catching a strong wild one after.

So, I went on an evolving spree. To start out I felt that it would be more time efficient to mark the Pokémon I am going to evolve as a favourite. This helped to reduce my time in having to scroll on which Pokémon to evolve. I also made sure to evolve it during a time that is more likely to be less busy server wise while using a strong Internet connection as I find the server lag can play a role even when it comes to simple things like the speed in transferring Pokémon into candy. I actually added a more than 60 to the favourite list just in case the 30 second is inaccurate and I could evolve more.

As I started to evolve the Pokémon I noticed something odd. It seemed like the 30 second to evolve a Pokémon time was truer for the Pokémon that would be registered as new to my Pokedex due to the additional animation. For other Pokémon such as the pidgeys where I already a had the evolved form registered it felt more like 22 to 23 seconds for the whole process until I would go on to the next one. That extra 7 seconds adds up in the span of thirty minutes too.

In the end I was able to get about 80,000 exp. Kind of funny too on how I was getting the achievement unlocks for evolving all at once too. Not bad as it makes leveling up at high levels less daunting. You can see here some of the Pokémon I got as a result of my evolving spree. I still have well over 1000 Pidgey candy as well and that is not including the other Pokémon candy I still have. Maybe I’ll do a straight test in the future with just Pokémon that wouldn’t give me a new capture bonus too. Either way, it sure is fun to see this much experience gained at once. Hopefully you can get similar results as well.